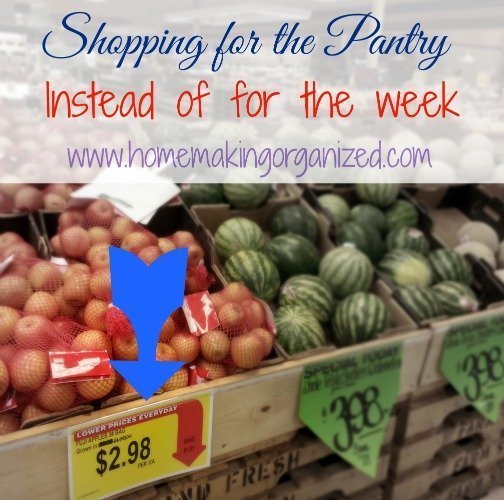 What does that mean anyway? Shopping for the Pantry Instead of for the Week?

It's the only way I could think of to express how my thinking about grocery shopping has changed.

My grocery shopping has changed in the last few months.

About four months ago I shopped weekly for pretty much everything we needed for meals for the week.

When you generally follow a Weekly Menu Plan it seems like things work out that way. Print out a grocery list and get it all for the week.

I did and do admire those that shop once a month and make all these meals for 30 days but I never thought I would be one of them. I didn't think I had the patience or know how or even the resources, as in stores, to get it done.

So instead each week I would buy a few peppers, a pound or two of meat, a dinky and expensive package of cheese etc. My grocery bill was high and getting higher.

Things like coconut oil, olive oil, and my tea easily added $10 each to my weekly bill. Not good eh?

And then usually when I filled my pantry it was with spices, condiments, snacks, and a few canned items.  I also purchased items for the freezer as they showed up on sale. There was no rhyme or reason just if I had the money and if they happened to be on a good sale.

I think the best kind of bulk shopping I did was for meat. I could spot a meat sale a mile away and we've always had plenty of that in the form of chicken, fish, and beef.

Then we started preparing to move into a new home.

My husband decided that, like we had done with everything else we purchased, we needed to come up with a monthly grocery budget.

Not weekly. But monthly.

We averaged our weekly grocery bill and came up with a number.

The stipulation was that I also needed to do my best to fit in paper and cleaning products.

I usually didn't add those to my grocery budget so we had no idea what that would amount to.

We moved into our new home and I moved on to my new shopping budget.

My first month on the new grocery budget I was down to $18 for the last week of the month! Oh no! Could I do it? I normally spent between $70 and $85 a week buying all we would eat for the week.

I did do it but it was milk, eggs, some fruit and veggies.

We didn't starve and we had plenty of food in the pantry at home but I was starting to run out of some staples so I had better rethink things.

That week's shopping opened up a whole new way of grocery shopping for me.

All of a sudden a lightbulb went off!

Maybe that expensive Costco card I was carrying could help me out next month when I had my new wad of cash to deal with.

I talked things out with my sister who shops at Costco quite often and she told me some things I could pick up there in bulk. Her system is very sensitive and she's gluten free. She does deep research so I just go to her when I want to know something.

Phew! I spent a lot but now I didn't need to deplete my weekly shopping budget with those items. I tried buying eggs at Costco but the price per egg was the same as I was buying at my local market and the eggs at my local market were hormone free, and jumbo often having 2 yolks.

I continue to go regular grocery shopping each week but now I only have to get the fruits, veggies, milk and eggs and any other specialty things I may need for a menu plan such as steak (grass fed). Woo hoo!

But! And here is where it finally clicked for me…

Those things didn't completely use up the week's funds and I had enough left over in case something was on a too good to be true discount. So I could load up! I mean shop wisely.

For example the next week, at my regular grocery shopping foray, packs of hormone free chicken thighs were on a very deep discount. I bought $20 worth which was enough for 13 meals!

Apples were also on sale that week and I got a whole bag of local ones for $1!

Some other great deals I've been able to glean from…

Over the past month we've scored 3 Bushels of Apples for $3.00 – Fuji, Ambrosia, and Aurora varieties – I canned, froze slices, and juiced, not to mention the baked goods such as apple pie

I have a rhythm to my shopping now.

At the beginning of the month I head to Costco and buy any pantry and staple items I need.  Some other items I buy there are…

Weekly shopping is for fresh produce, chicken (it's the best deal at my local market), and other stuff.

I try to pay more attention to coupons although coupons for organic and healthier items are much harder to find.

I buy my spices from Penzys. There's a store in the next city from me and I also order online. Their quality is great.

The market I shop as carries local produce and products so often there are big sales on surplus fresh items like my apples, sometimes carrots, onions, mushrooms, potatoes, chicken, beef.

I've always made our desserts.

I grow food in the spring and summer.

I'll be taking a grocery eCourse from Growing Slower this January.

Becoming more proficient in putting up the surplus. I've been trying my hand at canning and freezing so far.

So does all this mean I don't use my menu planner? Au contraire. I still do. I subscribe to eMeals right now and even with my new way of shopping

I'll admit I've always been spendy at the grocery store. We don't eat out and we budget so much in other areas I figured why not? But why throw away good money? It only makes sense to save as much as you can.

So do you have any more grocery tips for me? 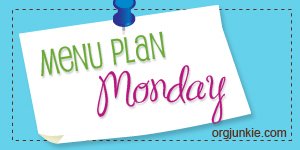