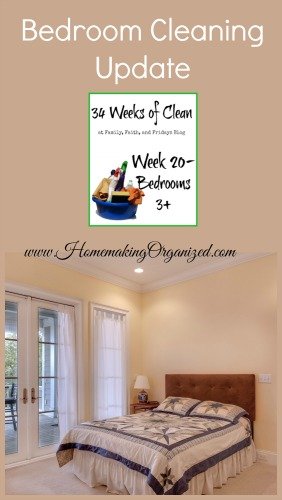 We're in Week 20 of 34 Weeks to Clean and we've been spending a bit of time getting the extra bedrooms in our homes neat and tidy.

On a side note I've been much too busy to create any printables for this section and Michele has been ultra gracious about that. If you think you'd like to see something on your walls to help keep these areas organized let me know and I'll see what I can do.

Back to the bedrooms. It seems like you never get things just the way you want them in a home. There is always some project to be done. For us it's….well it's everything but for sure our bedrooms need some tidying up.

These past two weeks we've been working on 3 bedrooms in our home. They are certainly far from being done but I'll still go through what our goals are, what we've been doing and where we're at.

The Skinny on Bedroom #1

Bedroom #1 is our daughter's bedroom. When we moved in to this home we let her figure out how she wanted her bedroom furniture to be set up. Her bedroom furniture amounts to a bed, two Ikea shelving thingys, and some hack of a dresser that needs some refinishing or just to move on.

To set up her room she immediately wanted her bed on the diagonal. She had seen that setup at one of the homes we previewed when shopping for a home and it had been stuck in her head ever since.

Now that bedroom with the bed on the diagonal only had a bed and a night stand in it so it didn't take up as much room as her's does. With all of her extras her room was quickly packed.

For months I begged and pleaded with her  and she finally let me move her bed to stand, headboard first, right in front of her window. This put it in the middle of her room.

Still no good because then she decided her dolls needed her tent to be their home and it needed to be erected in her room. Aiiieeee! Again things were just too cramped.

Finally a homeschooling friend shared a post of her daughters' bedroom makeover. Instantly I was inspired. I could see some the changes that would make a difference in my daughter's room.

To get the message across I showed the Sweet Peanut the blog post and talked about how we could do similar things in her room. All that pink and lightness really spoke to her and she agree (yaaay mom!) so she agreed to the change.

I don't know what JC Penney was thinking but her bed ways a ton. Anyway, I spent one off day moving her furniture around and getting in a good workout as a bonus.

To sum up this room it is still in a state of flux as she insisted on putting the tent back up and we've since talked it down again (oh when will that thing give out!).

We also had a bit of a snaffu with her curtains. The rod holders have started coming out of the wall so hubby will have to see what happened there but maybe you can get the idea of what this room could and hopefully will be.

We also decluttered (so important) as we changed things around. I remember moving stuff out but it still seems like there is a lot of stuff. Oh well.

What's Going on in Bedroom #2

Bedroom number two is my husband's former office. He says “ours” but I don't go in there except to file and tell him it needs cleaning so I call it his.

He has finally agreed to move his office to another room (more on that in the next section) so this room will be turned into the guest or future family member's room (don't ask, just go with it).

All that is happening in this room is the removal of everything except a bookshelf. We also need to purchase some blinds for the room. We've been moving out of here very slowly. About 15 minutes a night and that's on a good day.

A lot has left this room but there is still a lot left to move. We're decluttering very slowly here too. Important family papers resided in this room so we're going through everything a little bit at a time.

This is the room in this home that was meant to be the home office. My husband has resisted greatly in using this room.

He insisted he wanted to be near us in the craft/homeschool room on the second level so he initially took the guest room for his office. As a result this room became a junk room. We tossed boxes from packages in here, workout equipment and my daughter brought her friends in here to play.

Was I happy? Of course not but I held my peace.

Then one day my husband had a change of heart. He was ready to move to the intended office. Right around the time Michele gave us Week #19's assignment (yaaay Michele).

We cleared out all the junk, sent stuff to Goodwill, filled the living room temporarily and broke our backs bringing down the office furniture.

He moved in my daughter's homeschool table from earlier days (she can still sit at it) and made a little nook for her to work at. Took one of my plants, and my mini fountain to decorate and we're continuing to move things down 15 minutes a night.

So far all is well. It's nice and tidy like he likes it except there is still a bunch of stuff in the old office to move into it. I've ordered him a canvas print made from one of his pictures he took on our vacation as a Father's Day gift to jazz up the walls. That should be here soon.

Since we've been working on 3 rooms we're doing it a little at a time. When my husband comes home from work we set the timer for 15 minutes and spend those items moving things back and forth between the old home office and the new. He's doing most of the work here.

In my daughter's room she and I work during the day. I move the furniture or give her a task to do and she fine tunes it. Her flowy curtains will go back up soon.

Are you joining us for 34 Weeks of Clean? This next week we're working on the Hall Closet Jump in any time! 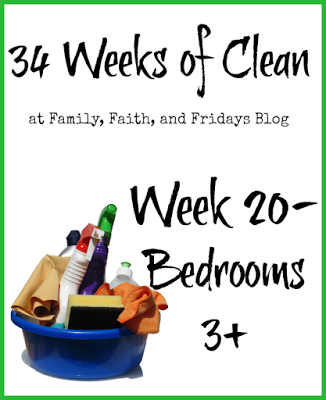 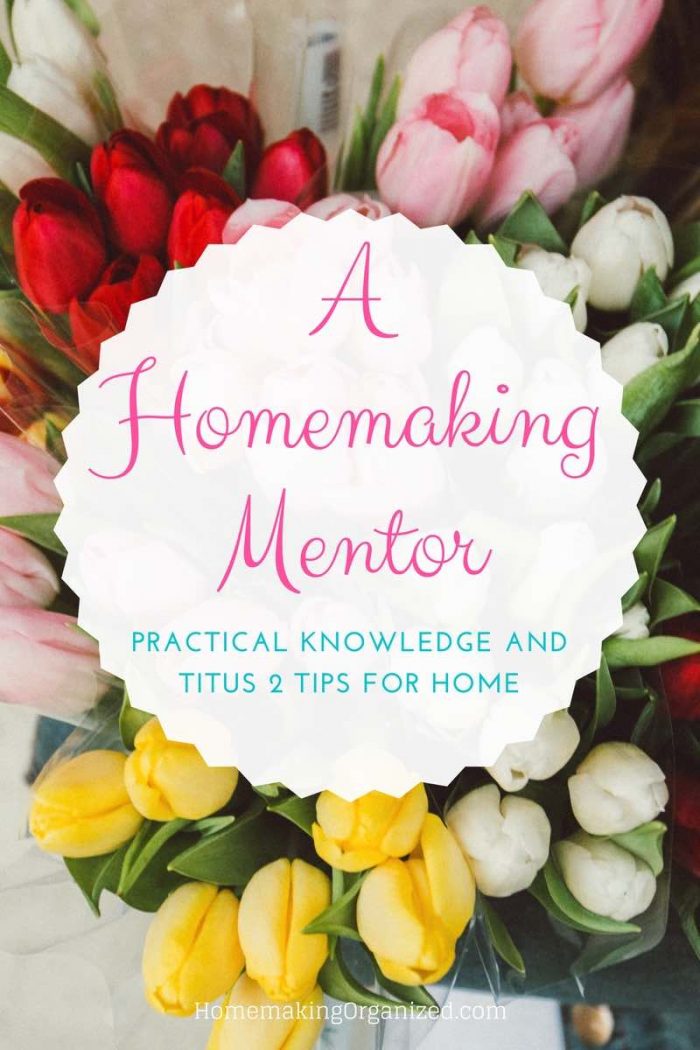 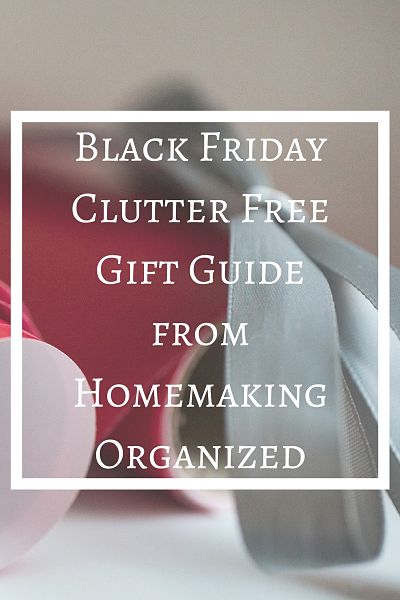 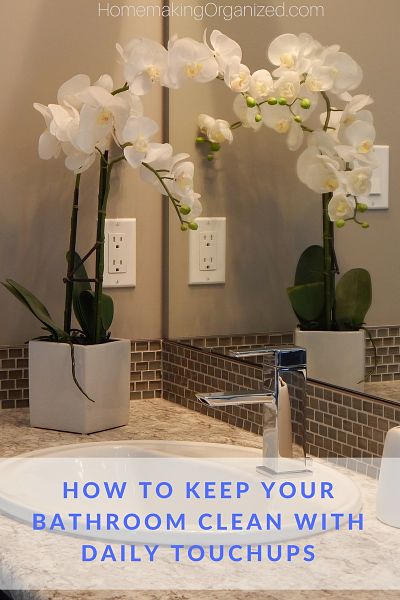 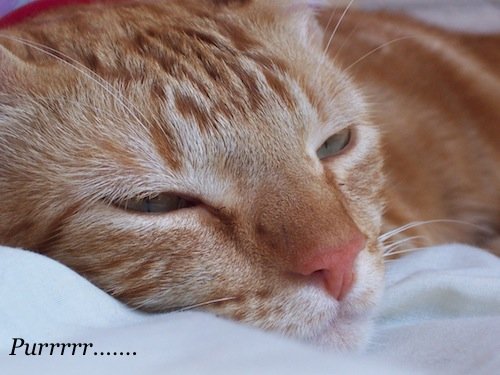 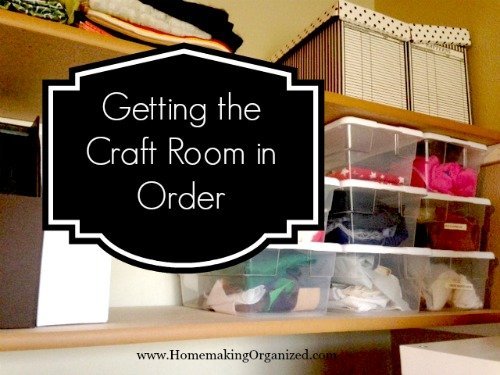